Depending on what role or function you have, this post may either make you squirm uncomfortably or scream with delight. Change does that to people.

When business shifts happen, there comes a long enough period of time where smart people begin to say “I think we can manage this better”. That’s exactly what’s happening between the widening and important gap being created between the marketing function and the Chief Marketing Officer (CMO) and the IT function and the Chief Information Officer (CIO). 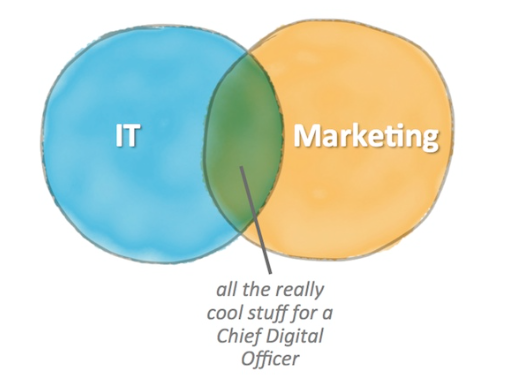 Top level executives and front-line staff are the first to admit that digital is not being managed well inside companies and things are falling through the cracks. Oftentimes, digital operations are lagging the expectations of their customers by 5 years (and in some laggard industries 10 years).

Digital in BtoB and BtoC environments is being managed by a wide variety of matrix solutions across a number of functions and the consensus is:

And boards and CEOs realize it’s time to do something about this technology conundrum – witness the “what keeps CEOs up at night” rise in technology’s importance. 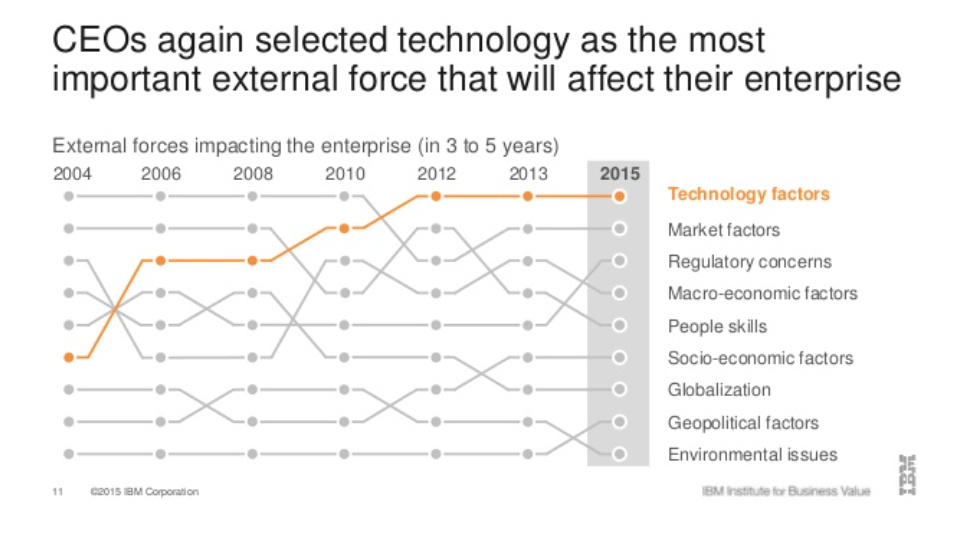 The IBM study above shows that many things have stayed the same in their relative importance spectrum but technology has zoomed to the top. Smart organizations have started to dedicate executive level resources to the challenge. Enter the CDO – the Chief Digital Officer. 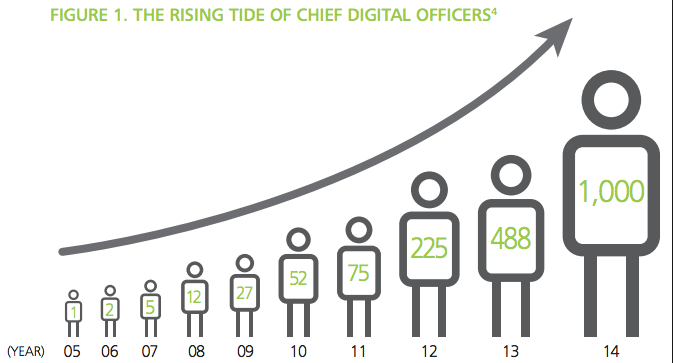 At last count there were 2,834 of them on LinkedIn. Semantics of what we call the role aside, they are picking up the pieces from the often adversarial relationship between CMO and CIO.

Think about it – you won’t have two more different personalities on an executive team then these two – the CMO and the CIO. Their reward for good work, risk motivation, stakeholder audience and academic/professional backgrounds are radically different. Marketers are accused of chasing the latest and greatest without accounting for the downsides, financial accountabilities and cultural resistance. IT people are accused of maintaining operational excellence at the risk of using technologies unfriendly to the customer experience and practices unfriendly to employees. A mess is being left in the middle.

As a result, the trend is leading to a role that reports straight into the CEO. 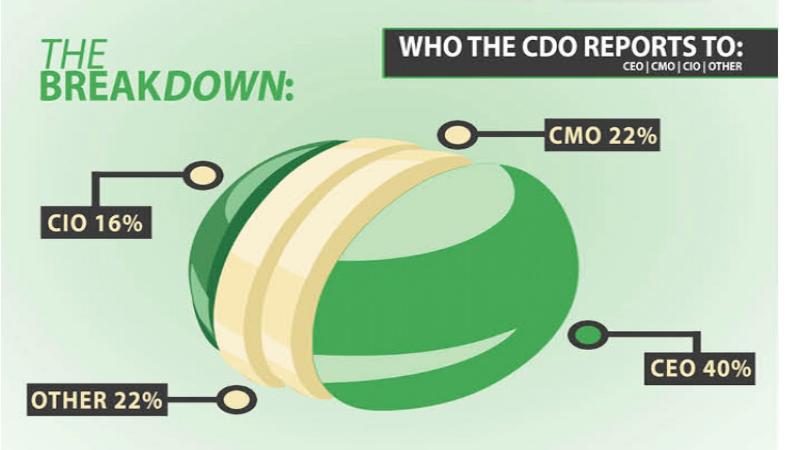 So what does a Chief Digital Officer do? We have attempted to list the 18 things that CDOs could do to drive value into a business that currently are either: not being managed, being managed poorly or do not have accountability by other executives in the business. 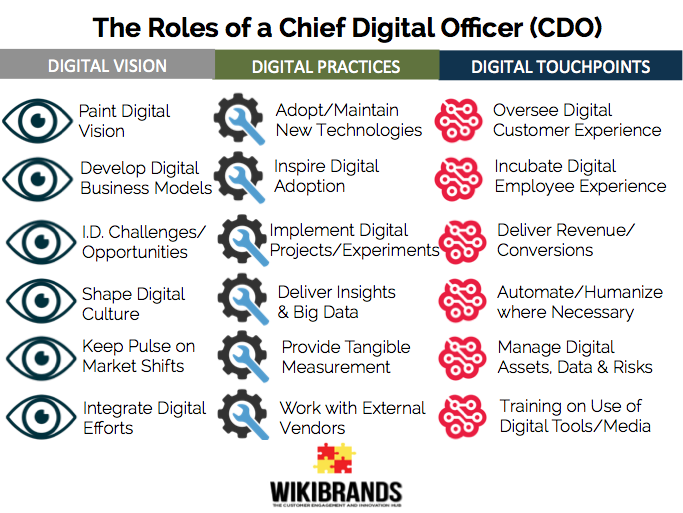 This chart below also gives you a sense of which industries are jumping this rising trend of CDO adoption first – the key takeaway is it is early days for nearly every industry: 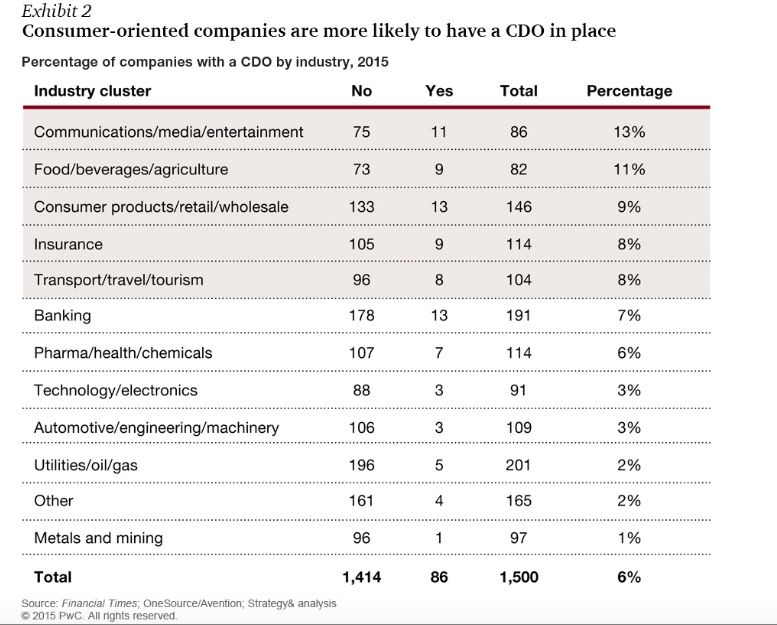 Before people start debating where these new business transformers should be coming from, in practice, it appears that there is wide range of starting points so far. Given the demands of the role and industry, this is the functional discipline where the CDOs are coming form: 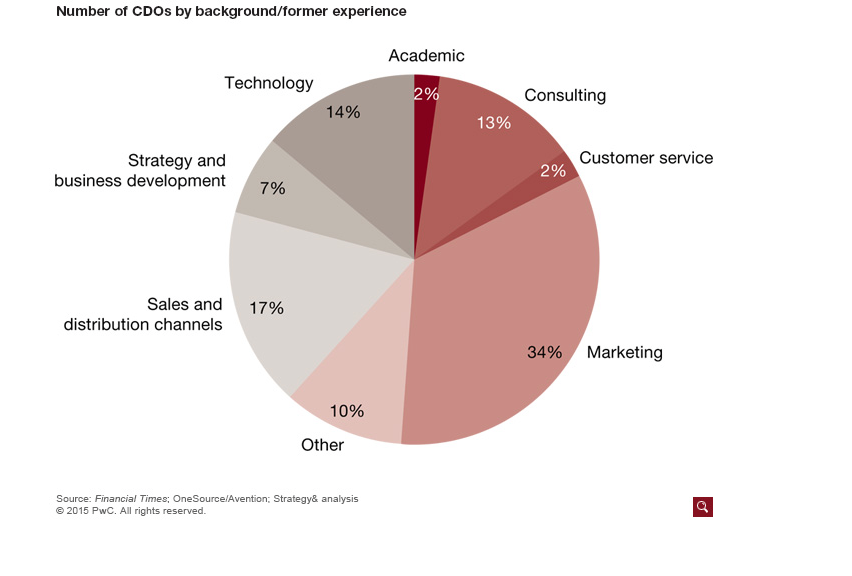 And directionally, there are four different sub-types of CDO role being created dependent on the nature of the business, the importance and strategic level expectations of the role, the external/internal focus of the role, the maturity level of digital inside the rest of the organization and capabilities that exist with other functions. 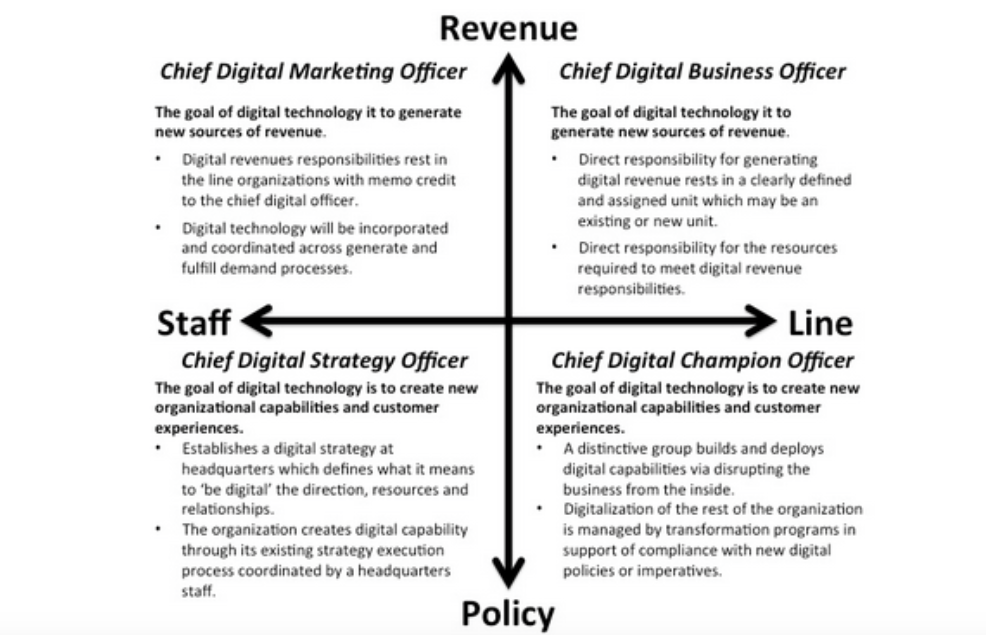 However you construct the role, it does not appear to be going away anytime soon. The role of Chief Digital officer is predicted to be in 50% of the largest global companies by 2017 and 81% of the top digital organizations already centre “digital strategy” as an executive level accountability.

Change is coming executives, and it’s acronym is CDO.