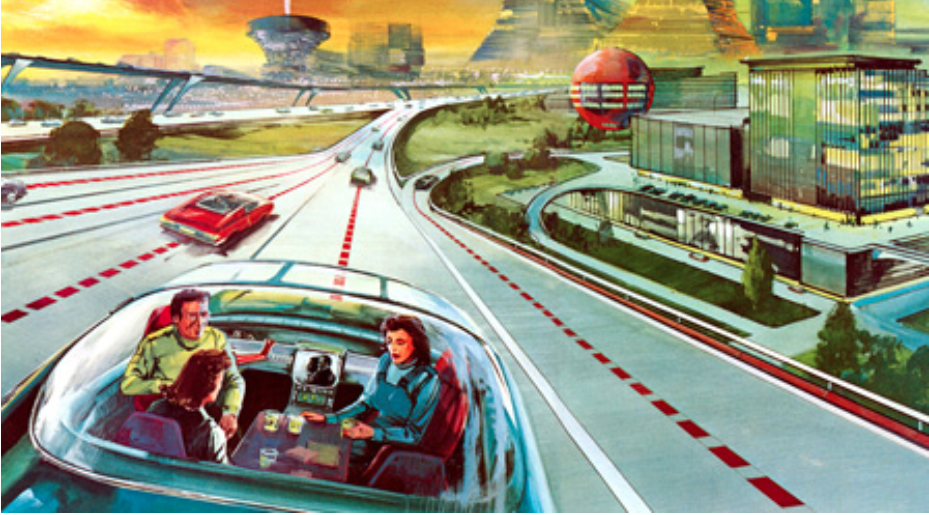 Here is the second instalment containing seven examples that point to a world that keeps getting quicker, faster and tougher to evaluate in the “Transportation” industry.

As we have seen over the last 30 years, massive disruption has hit the $4 trillion transportation industry. Detroit has shrunk into a tiny version of its former self.  Air travel has continued to go through the constant boom and bust based on the economy and jet fuel prices, and has yet to collectively make a profit. The developing world can’t satiate themselves fast enough for the taste of car ownership while Western-World millennials would prefer none of it. And we all need to come to grips with increasing urban traffic congestion and its environmental effects the world over.

The difficulty in transportation is that when changes start to happen, they roll fast. And the lead times to catch up to that change can overwhelm companies, governments, societies and environments.

Here are the seven prime examples…whoosh:

By 2020, we will have 11X more connected automobiles being produced each.year than just 8 years ago, making them the majority of cars produced by 2020. Since the 1908 introduction of the Ford Model T, we have now entered the fourth generation of cars – beyond: merely available; easy to use; comfortable, safety and feature-driven; to now being mobility connected. We want our cars to be extensions of our smartphones, secure environments, entertainment streams and personalized feedback mechanisms. The revolution may be coming with a roster of anticipated and unforeseen benefits. 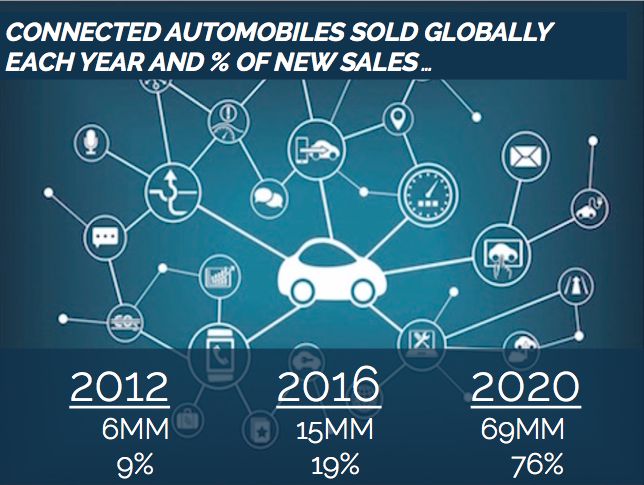 Uber was the first to jump in and introduce the first commercial autonomous (or self-driving”) car in Pittsburgh (of course they have to staff it for regulatory and legal reasons). The bigger news is that in less than a full generation, more than 65% of cars on the road will be self-driving. This will increase our amount of productive time (10 trillion minutes saved by 2040), and likely reduce our passion for gearing up on the “open road”. Think about the impacts on car design (see picture below for an IDEO concept vehicle of the future)? car ownership? on insurance? on traffic congestion? on light signals? and will truck drivers become the next secretaries, out of work due to technology shift? 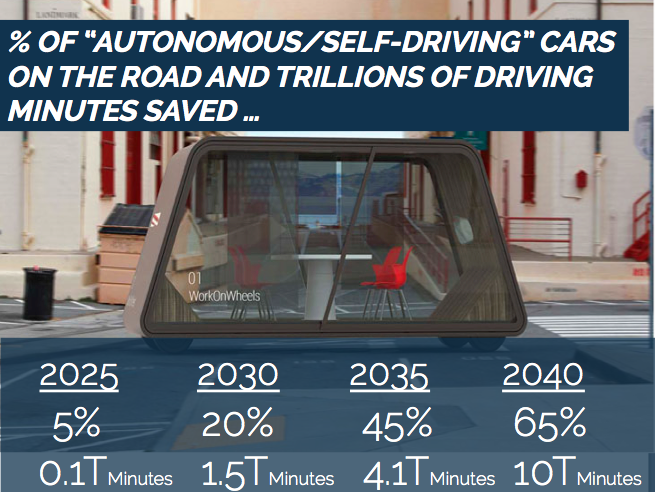 With the likes of CarGo, Zipcar, DriveNow and others, will the environmental, financial and lifestyle advantages of peer-to-peer car sharing make the idea of car ownership a thing of the past? Evidence – we will have 40X more car sharers in the world over the course of merely one decade by 2018 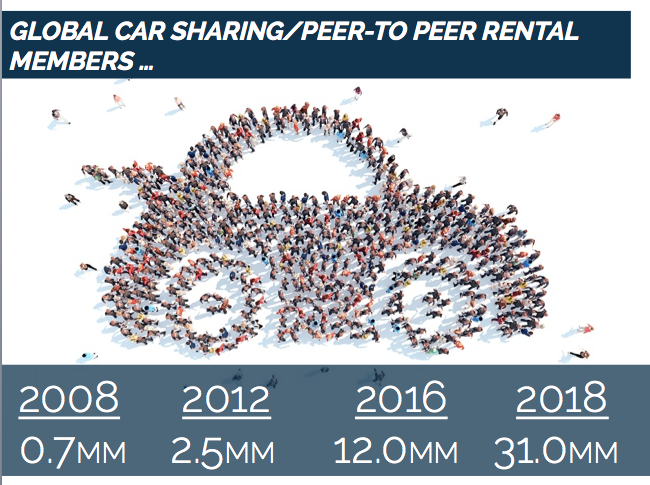 Perhaps this documentary was premature? Maybe we all are ready to give up the catalytic converter? Even though we have frenzied lineups for Tesla’s new electric versions, imagine a 3o year period where we’ll see a 70x jump in electric cars being produced annually and the infrastructure to support it (battery life, charging stations, electricity demand and standards) to support it. 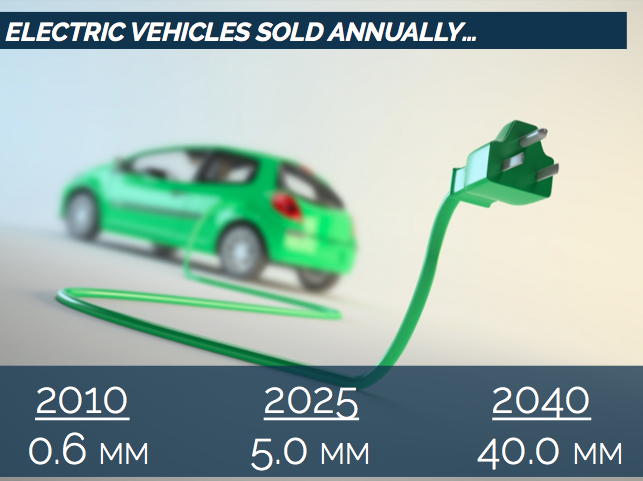 We have seen a tripling of bikes produced globally over a 40 year period. Driven by cheaper economics of bike production, increased paving, urban incentives and lifestyle preferences, it may be true H.G. Wells quote “every time I see an adult on a bicycle I no longer despair for the future of the human race”. But disturbingly, even though we can now own bikes, will we want to ride them? Even though most trips are within 5km, only 0.9% of all US trips are currently made by bike. Self-propelled, two-wheel fans and advocates, don’t despair – here are 10 countries to emulate. 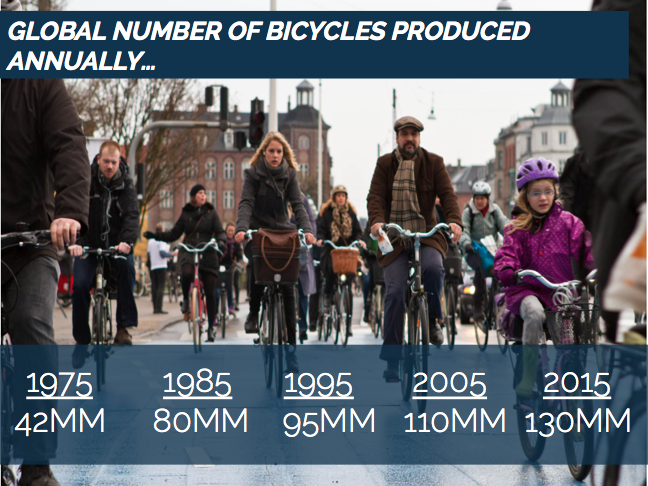 For the greater part of 50 years, it has cost the same amount of money to push tonnage into space, usually exhausting tonnes of highly propulsive gas and non-reusable rockets. Given the push for Mars, need for economical satellite activity and privatized competition in the “space race”, we may be seeing space payloads that will be 10X cheaper to push into space soon and a return to mainstream excitement about space travel. 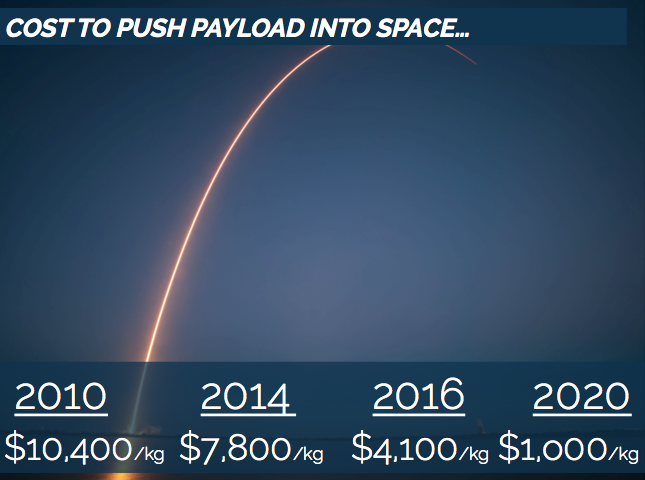 Although Amazon Prime Air, Walmart  and others have been rejected for commercialized delivery of mail and package delivery through drones, it may not be a distant pipe dream. Drones are being accepted as the next new holiday toy, but also increasingly for commercial uses. We anticipate 14X growth in annual shipments over a very short 6 year period. 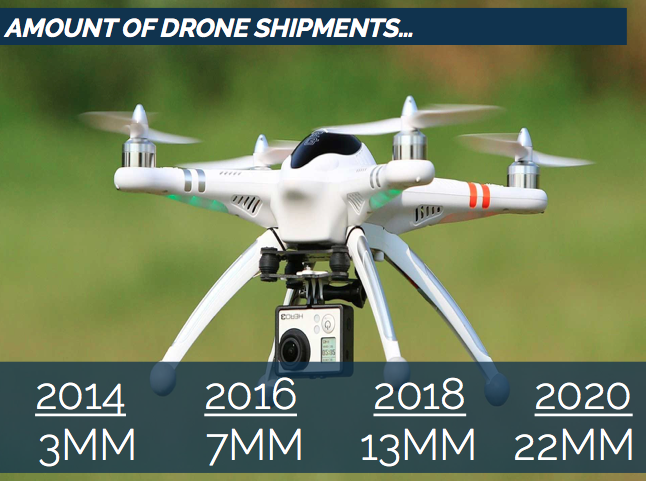 Follow or link to me for more Fast Forward Updates here soon, on my website SeanMoffitt.com and a new eponymous venture launching soon.